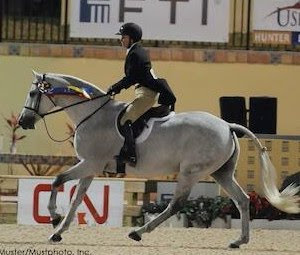 Wellington, FL - April 3, 2010 - Louise Serio rode to the biggest victory of her career when she piloted Castlerock, owned by Bryan Baldwin, to the win in the $50,000 Chronicle of the Horse/USHJA International Hunter Derby at the 2010 FTI Winter Equestrian Festival. The class was also Serio's first derby win ever. Second place was awarded to Scott Stewart and Fashion Farm's Summer Place, while the yellow ribbon went to Tamara Provost and Peridot, owned by Stephen Martines. The prestigious class is part of the Chronicle of the Horse International Hunter Derby nationwide tour, and offers one of the biggest purses in the hunter world.

The class was scored cumulatively over two rounds, and the final round took action under the lights in the International Arena at the Palm Beach International Equestrian Center. The first team of judges was made up of Danny Robertshaw and Bob Crandall, while John Roper and Paddy Nyegard were slated in the second position. Keith Hastings and Pat Dodson were the scribes for the two judges' panels. Judges awarded competitors with a score for their jumping rounds, as well as a bonus point for any large height option they chose to jump (out of five available), and a bonus score out of ten points rewarding riders for their handiness.

Bobby Murphy co-designed the course with Skip Bailey and was assisted by USHJA High Performance Hunter Committee Chairman, Ron Danta. The course was set in the International Arena and offered five different height options over sixteen total elements. The course featured a horseshoe bank, a table bank, as well as an interesting one stride in and out that was made up of hay bales, which were arranged in a large circle. Each fence on the course emulated a natural element that would be found on an old-fashioned hunt course. The course had several areas where riders could show off their handiness and flowing hunter strides, and finished over a long run to an oxer option heading towards the in-gate, where riders were asked to hand gallop almost a quarter of the way around the International Arena to the final fence.

Louise Serio and Castlerock were untouchable over the two rounds of competition, and Serio earned the highest score of her entire career when the second panel of judges awarded her with a 99 after her brilliant second round. Serio talked about the course, and said, "Obviously the course went quite well for me when I rode it. I wasn't sure when I walked it exactly how it was going to go. I think the circle of straw was concerning to all of us because we really didn't know what our horses would do with it."

"I have to say I thought it all came up really well. I liked my turns, I liked my jumps, and my last jump was long! But, once you commit to something like that you just have to keep going," she smiled.
Serio went last in the class, and entered the International Arena with sheer determination. "I'm competitive, but I wanted this class. Especially when I was coming back (for the second round) on top," she admitted. "That's a hard position to come back in and that's a lot of pressure, and I really wanted this class."
Serio did not show any signs of nervousness when she galloped the nine-year-old gelding around the International Arena and chose the most difficult tracks and heights at each option. Serio finished the class with a bang when she flew to the last fence as the crowd erupted before Castlerock's feet could even touch the ground. "I wasn't thinking much (on my way to the last jump). I was just hoping that I saw something in the future out there. After I jumped the oxer I thought 'reorganize a little bit, then just go like hell.' Scott had just had a fantastic round, and that's a lot of pressure to know that he was right there," she remarked.

Riders spoke about how the derby classes are advancing the hunter sport and industry, and Serio commented, "I think the derby is just the whole new level of hunters. It is exciting, challenging, and moving forward to become more and more difficult."

A beaming Serio had a storybook end to the 2010 FTI WEF, and finished by saying, "Anytime you win a class like this it becomes your biggest win. I have to tell you that I'm so grateful and I'm the luckiest person alive. I have great family, friends, and great horses. It's just fantastic."

Here's a video of Louise Serio riding Castlerock at the 2010 AHJF Hunter Spectacular, earlier this year: